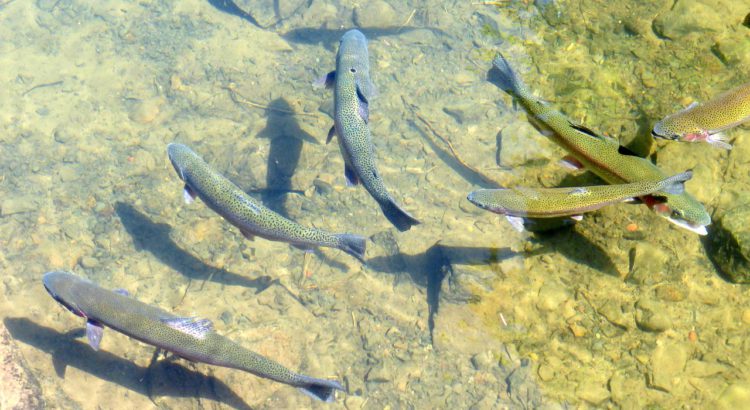 Rainbow Trout, a quality freshwater species that was first introduced into Australian waters in the 1860s and 1890s. Native to North America, Europe, and Northern Asia are now found in known freshwater lakes, rivers and streams all over Victoria.

Since first introduced, Rainbow Trout have become a popular species amongst anglers. Not only they are good quality table fish but also make great sporting fish. Often identified by their olive green appearance and a distinguished crimson band across the body.

Which results in Rainbow Trout being best targeted during Winter and Spring. One great news for us anglers is that most lakes, rivers, and streams are regularly stocked for fishing opportunities.

Where to locate them and the best time of the day?

Rainbow Trout can be found in various inland waterways in Victoria and some popular hotspots include Goulburn River, Lake Bullen Merri, and Eldon Pondage.

A very particular species, Rainbow Trout prefer cool, clean, and well-oxygenated waters. Often found sitting in fast currents and feeding on passing by food. In shallower waters during late in the evening and early mornings, Rainbow Trout can be found feeding on baitfish, mudeye, and other insects.

Rainbow Trout aren’t as common once the weather warms up and if targeting these guys during these months look for waters that are provided with a lot of shade. Rivers at higher altitudes and forest streams are preferred.

To escape the heat during the day Rainbow Trout are often found in deeper waters. Ideally, these guys are best targeted in early mornings and late evenings even throughout the night for bigger fish.

Similar to other freshwater and saltwater species look for a structure where Rainbow Trout will be feeding around. Logs, boulders, banks, both man-made and natural structures will be a good starting point.

What set-up should you use for Rainbow Trout

But my preferred option is a lightly weighted spinning rod either 6-7 foot in the range of 2-4kg paired up with a 2000 or 2500 size spinning reel. Various lines can be used when it comes to Rainbow Trout fishing and this may depend on if you choose to fish with lures or bait.

If choosing to fish with lures my recommendation is to spool up with an 8-10lb Braid mainline connected with the same line strength Fluorocarbon Leader. While on the other hand if fishing using bait, monofilament or fluorocarbon similar line weight mainline will do the job.

Fishing with either live or dead bait various options is available. A tip when choosing the right bait is to asses what the local Rainbow Trout are feeding on. These baits are often readily available and become very successful.

Bait fishing for Rainbow Trout can be kept simple and I often use a running sinker rig paired up with a size 6 long shank hook. But your hook will be dependent on the type of bait you choose to use.

Baits such as Minnows, worms, maggots, mudeyes, insects and dough baits are all great options to choose from.

Fishing with lures for Rainbow Trout and the options are almost endless and can become intimidating. Various soft plastics, hard bodies, vibes, blades, spinners, and flies are available on the market specifically to target these guys.

Surprisingly I’ve found and has been the case for some anglers is to use load colours when fishing for Rainbow Trout. These at times can work very well and have no resemblance to natural bait.

Ideally, work lures with various techniques from retrieving erratically, slow and steady or fast retrieves with sudden stops. Various water columns can be targeted. But I often target the middle to the upper water column in shallower waters during early mornings and late afternoons. I’ve found this works fairly well.

Rainbow Trout have various regulations and restrictions. It’s best to check local regulations prior to heading out onto the water. For a guide on closed seasons, catch, and size limits visit the ‘Victorian Fisheries Authority’ website for an in-depth guide.

As always, practice safe handling methods if you intend to catch and release fish.