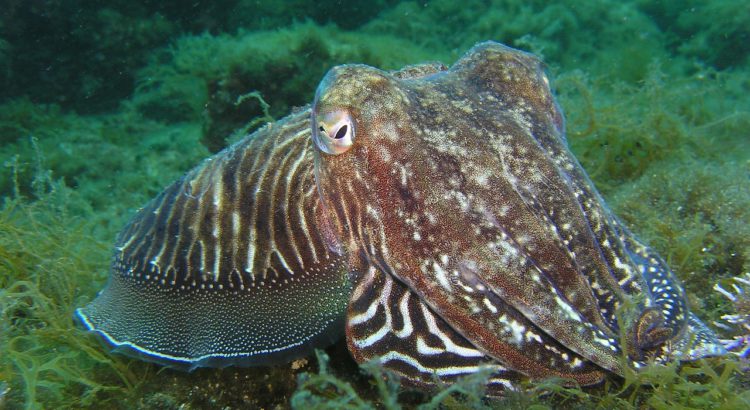 Their camouflage capabilities are second to none. Chromatophores located within their skin allows them to perfectly blend into any background.

These guys are similarly caught with the same tactics as squid and often are a bycatch. In comparison to Squid, Cuttlefish is considered tastier with a white meaty flesh found in their mantle.

Cuttlefish are best identified with their long tubular body often referred to as the mantle. A small head filled with tentacles and set of two very large noticeable eyes.

Amongst their tentacles, two tentacles are more pronounced. Which they use to grab hold of their prey and also used during mating.

Cuttlefish are distributed throughout the southern parts of Australia. In particular, for us, Victorians can be found in numerous locations right around Port Phillip Bay.

Often found in shallow waters with depths from 7 to 12 meters around broken reef beds, weeds, and natural structures.

For us, land-based anglers Cuttlefish can be targeted from most Jetties, rock walls and wharves. Man-made structures often provide refuge and a food source as bait fish congregate around these structures.

Best tide and time of the day to catch cuttlefish?

Cuttlefish similarly to Squid is caught throughout the day but often the best times are early mornings at dawn and late afternoons at dusk.

Night fishing also works well around Jetties as Cuttlefish are attracted to the light which brings in bait fish.

What type of set-up should you use for Cuttlefish?

Cuttlefish are best targeted with a light spin rod and reel outfit. Often for land-based anglers, a graphite rod ranging from 7′ to 8′ will be ideal. Paired up with a 1000 – 2500 class reel.

Spool with a braided line anything between 4lb for the smaller cuttlefish to 14lb for the bigger ones. Similar weight class fluorocarbon leader line should be used tied with an FG knot.

When it comes to targeting Cuttlefish the same method will be used as with Squidding. Both bait and lures can be used.

If optioning to use a baited rig setup. This is best done with a Squid prong or spike attached to a floating rig. Feed the whole baitfish such as Pilchard, Whiting, Herring, or Mackeral onto the spike and attach underneath the float.

Cast out and keep your line tight and wind in any slack as the current moves. You’ll notice a strike and see the float submerge once you have a cuttlefish on. Reel with a steady retrieve but not too fast to rip the tentacles from the cuttlefish’s body.

Lures provide some of the best fishing and a wide range is available on the market. Squid jigs are used for Cuttlefish and various sizes, colours and sink rates can be used.

Often with lures its best to cast these out and work them just off the bottom. With a sharp flick up with the rod and winding in the slack work as this imitates an injured baitfish or prawns.

Various jigs similar to the ones below should be used. A good quality jig will last you a long time and provide you some of the best action. Some popular manufacturers include Yo-Zuri, Yamashita, and Shimano.

Local regulations, catch limits and sizes vary from state to state. It’s best to check your local limits prior to heading out onto the water when it comes to catching Cuttlefish.

Cuttlefish are categorised similar to squid and sand octopus. Within Victoria, a bag limit of 10 of each or combination is in place.

Please abide by the rules and handle Cuttlefish or any other species in the correct manner. Keep our waterways clean of any waste and dispose of correctly.