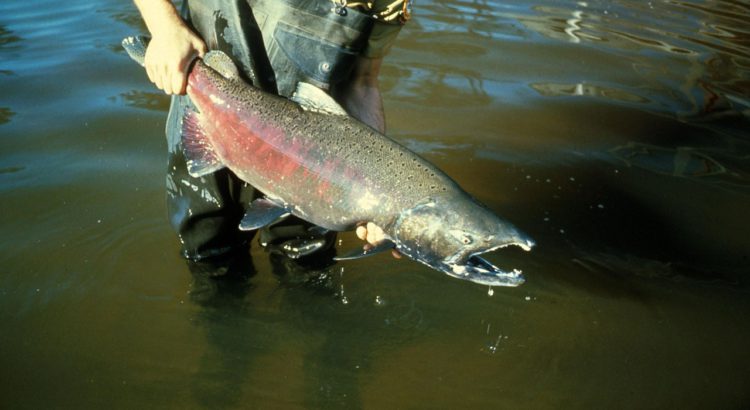 Chinook Salmon also referred to as King Salmon, Spring Salmon and Tyee are considered some of the best and highly prized freshwater species throughout the world. Identified by their largemouth, thick silvery body with a lightly spotted back and large almost square caudal fin.

These guys are mostly known for their sporting capabilities but can also be safely consumed. Chinook Salmon are an introduced species and can be found throughout the southern parts of Australia during the cooler months of the year.

However, like most salmonid species in Victoria Chinook Salmon are subject to open and closed seasons.

Chinook Salmon are considered a sea-run salmon in other parts of the world and come into freshwater systems during the spring to spawn. However, in Victoria, these guys inhabit a few freshwater lakes as mentioned.

The best time of the day and year

Cooler months of the year produce high-quality Chinook Salmon and like most Salmoind species including Brown Trout, Rainbow Trout, and Atlantic Salmon. These guys become lethargic over the warmer months and can be found in deeper water and areas that provide plenty of cover.

Ideally, the best time to catch these guys is during dawn and dusk as they are predominately more active and hunting for food.

What set-up should I use for Chinook Salmon?

Large Chinook Salmon can be caught at Lake Bullen Merri and my preferred option is to go with a medium-sized spinning rod and reel setup.

A fast action rod rated at 3 – 5kg and ranging from 6 – 7′ will be a great starting point. Pair this up with 2000 – 2500 size reel and spool up with either monofilament, fluorocarbon or braid fishing line typically ranging from 8 -12lbs.

However, if choosing to use lures while fishing for Chinook Salmon I highly recommend using braid as your mainline and similar break strength or stronger fluorocarbon leader. This will provide you with that much needed extra sensitivity while working your lure.

Chinook Salmon are known to take various natural baits found to inhabit the waterways your fishing in which include minnows, scrub worms, mudeyes, and yabbies. Surprisingly, Pilchards do very well considering they aren’t a freshwater natural bait.

A simple rig setup will work well and depending on the water column your targeting a float, running sinker or paternoster rig can be used. Hooks will be determined by the size of bait you will be using but a long shank or circle are some of the popular options.

Various lures are available on the market but I like to keep it simple and either go with a hard body or soft plastic lure imitating natural baits such as worms and minnows. Lures are most effective as you can cover more ground within a few short hours.

The trick to lure fishing is varying your retrieval methods. These can be fast retrieves with sudden erratic stops or a slow retrieve bouncing the lure on the bottom to provoke a strike.

Chinook Salmon are subject to open and closed seasons within Victorian waterways and catch and size limits do apply. It’s best to check local regulations prior to heading out on to the water or check the ‘Victorian Fisheries Authority’ website for updates.

As always when catching any fish practise safe fish handling and care and if planning to catch and release fish. Please use the correct fishing techniques to greatly increase the fishes rate of survival.