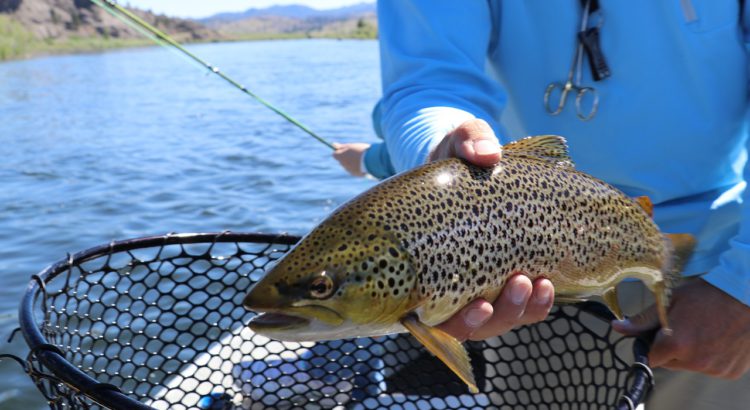 Brown Trout is a medium-sized freshwater species that is well known for its sporting capabilities. Often identified by their largemouth that houses a set of sharp teeth, brown to silverish tan in colour and small to medium size black and red spots throughout its body.

Brown Trout native to Europe and Western Asia was first introduced into Australia in 1864. These guys prefer cooler climates and often found throughout the Southern parts of Australia. Predominantly located in Tasmanian and Victorian lakes, rivers, and streams.

Browns are distributed throughout Victorian freshwater systems but are well known in central and southwestern Victoria. Some popular spots include Lake Bullen Merri, Hopkins river, Lake Fyans, and Tullaroop reservoir.

Browns like Rainbow Trout prefer clean, clear and well-oxygenated waters and is found in fast-moving currents amongst structure including banks, fallen trees, and boulders.

The best time of the day and year

Some of the best Brown Trout fishing is done during the cooler months of the year at either dawn or dusk as they are predominately more active. However, Browns can also be caught throughout the day and at night.

As the weather warms up Brown Trout are found in rivers and streams at higher altitudes and forests. These areas are well-oxygenated, cooler and provide lots of cover.

What set-up should I use for Brown Trout?

A lightly weighted spinning rod and reel set-up are best for Brown Trout and a graphite rod rated at 2-4 kg in the range of 6 – 7 foot will work well. Pair this up with a 1000 – 2500 size reel and spool up with either Braid, monofilament or Fluorocarbon fishing line as your main line.

Both lures and baits can be used when targeting Brown Trout. However, if using lures I recommend using braid as your mainline and pair this up with a fluorocarbon leader either same break strength or a little stronger. This is because you want the extra sensitivity that a monofilament line won’t provide.

Various baits can be used for Brown Trout fishing and the best baits are found to be inhabiting the waters your fishing in. The key to bait fishing is using live baits including mudeyes, grubs, srubworms, minnows, and grasshoppers.

The rig should be kept simple and depending on the water column you’re targeting either a float rig or a running sinker rig will work well. The hook will entirely depend on the size of the bait your using but a good starting point is to use a long shank hook or circle hook.

Various lures can be used including soft plastics and hard bodies that imitate natural baits similar to grubs, minnows, and insects.

Well on the other hand not so natural lures will also get attention including metal spoons and spinners which create a lot of vibrations and erratic movements. Any curious Brown Trout swimming along will be tempted to have a strike.

I find lure fishing to be the most efficient as you can actively cover more water and work different retrieval techniques. From fast and erratic stops to imitate injured baitfish or slow retrieves bouncing on the bottom to imitate insects or worms.

Fly fishing is another alternative to catch Brown Trout and it’s an art form in itself. Fly fishing is best done with a fly fishing rod/reel set-up and with fly lures. I highly advise talking to your local tackle shop in regards to fly fishing as this method requires a different skill set.

Brown Trout are a seasonal species and do have closed and open seasons. It’s best to check your local regulations in terms of catch limits and sizes. These requirements may vary from location to location and it’s highly advisable to check the restrictions in the area you’re fishing in beforehand.

As always practice safe fishing methods and if catching and releasing fish do so with the correct technique to ensure it has the highest rate of survival.

12 thoughts to “How to catch a Brown Trout?”